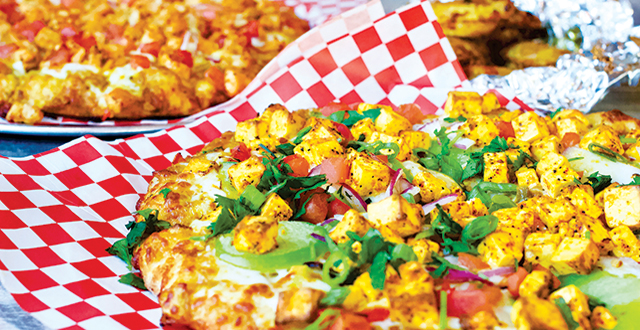 The Curry Pizza House is Definitely on to Something Big

Food fads come and food fads go. Remember the Cali-style poke explosion of two years ago? Or how about the tsunami of cupcakes? Well, the latest food craze sweeping the South Bay is Indian pizza. A cursory search yields almost a dozen dedicated Indian pizza restaurants, as well as another half-dozen pizzerias that feature some kind of Desi-inspired toppings on their menu.

Among the many restaurants cashing in, the locally owned Curry Pizza House is raking in rave reviews and business is booming. They’ve opened up three South Bay locations in the last year, including restaurants in Cupertino and Evergreen within the last few months.

While the name pretty much says it all, they do hedge their bets and offer “normal” pizza creations. However, I feel ordering a Hawaiian pizza at an Indian pizza place is almost akin to getting a chicken sandwich at Morton’s. On a recent visit, my cohort and I opted for a small Chilli Paneer ($13.99) and a small Butter Chicken ($13.99), along with an order of their Achari Wings ($9.99 for 10 pieces). In some cases, it might make more sense to split a pie half-and-half, but you’ll have to order at least a large.

Achari is typically associated with those delightfully sour, pickled green mangoes found in a condiment jar at most Indian restaurants; the idea of experiencing that flavor on wings was intriguing. While the wings weren’t as sour as I was hoping, the flavor was quite good. It’s a shame the wings themselves had flabby skin.

Finally, the pizzas came out, and they were truly packed with all the good stuff. The veg-head favorite paneer had a nice clean finish with all its fresh veggie toppings, including fresh tomatoes, bell peppers, cilantro, and both red and green onions, all combined with their curry sauce. However, I found the paneer (Indian cheese) cubes to be a bit dry and not spicy enough for this chili head.

Next up was the butter chicken (a.k.a. chicken makhani) and it was a home run from the jump. Butter chicken done right is my favorite Indian dish, and this pizza definitely did it justice. The yogurt, tomato and butter sauce was creamy, rich and spiced just perfectly. The diced fresh tomatoes and red onions also gave it a bit of freshness to go along with the perfectly cooked chunks of white meat chicken.

The crust on both pies was nothing spectacular, though it did serve its main purpose as a vehicle for delivering tasty toppings.

While most food fads are mere curiosities, I feel Indian pizza is legit. It’s the holy triumvirate of spice, carbs and cheese.